The Start
All my drawings start with a single sketch. On a good day, that one sketch will be all that I need. On a bad day, I will need several. This illustration started with a sketch in my One Sketch a Day book which was later posted to social media. In this image I just wanted to capture the raw power of Dr. Doom and just have him peeking out of the darkness without his hood. This was just a rough sketch and at the time, I really didn't plan to go any further with it. 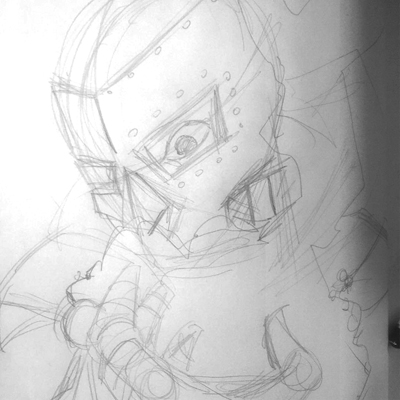 Refining Elements
I wasn't too happy with the design of Doom's mask from the previous day, so I sat down and did sketches of how I thought the mask should work. By this time, I had decided that Dr. Doom would be next in my weekly comic illustration series. 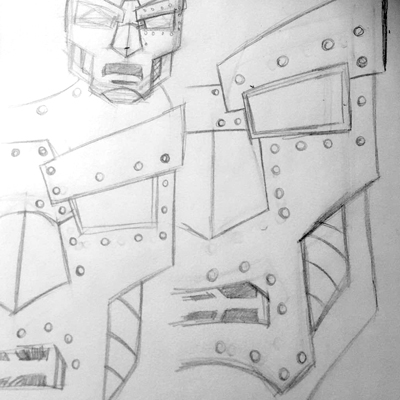 Shooting Reference
I'll be the first to admit that I don't use reference as much as I should. However, when the hand ended up being the primary focus of this piece, I decided that I needed reference for the hand. Rather than search the web for the right hand, I found this very handsome model who was more than willing to help me with the hand pose. 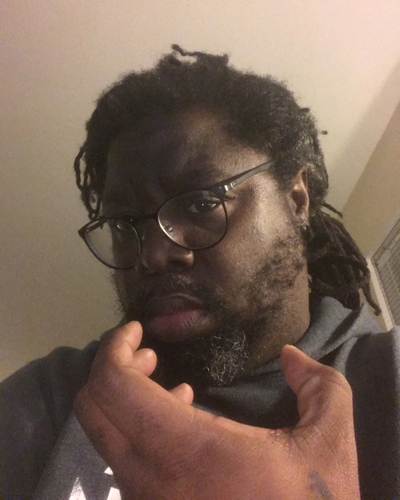 Beginning the Illustration
Because this was one of my weekly comic illustrations, I knew the size (9"x12"), the paper used (Bristol board), and the mediums used (India ink and alcohol markers). All I had to do next was transfer my sketch from my sketchbook to the Bristol board and use my reference to improve upon the hand. My focus at this stage is capturing the overall gesture without bogging myself down with too much detail. It is here where I do a lot of placement and erasing so that every element works together. 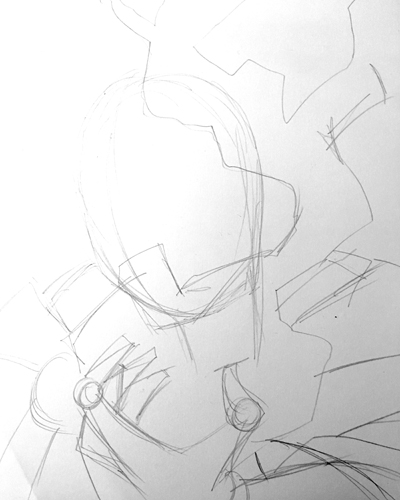 This would be considered the breakdown/ layout stage as the composition has been broken down and laid out.
Pencils
Since I'm also inking and coloring this piece, my penciling is really limited to the areas where I don't want to make mistakes. For this image, those areas were the mask, the eyes, and the gauntlet. As you can see, there are many more lines in those areas than in the rest of the image combined. 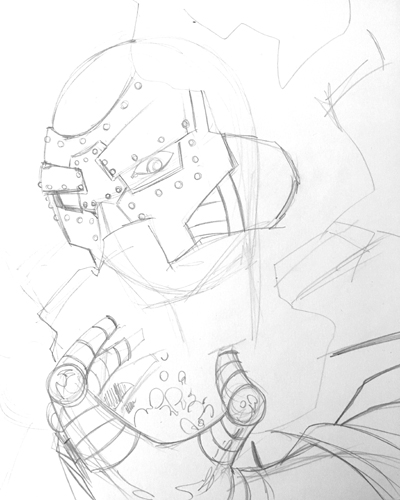 Inks
I started inks with the Kirby Krackle in the top left. The Kirby Krackle was the one area that would be completely freeform and drawn freehand with ink, so I jumped right in using my Pentel brush pen for the Kirby Krackle and cape. Once I had an idea of how that would look, then I moved down to the hand as it was the source for the Kirby Krackle.  You can also see that I inked in the left side of the mask. This is because that formed the border for the ride side of the Kirby Krackle and I wanted to make sure that the Kirby Krackle was interacting with the other elements instead of just sitting on top of them.  The Copic Multiliners were used for the mask and gauntlets.
As the Krackle met other areas of the image, I completed those areas and added lots of Xs to note where I would use India ink later to fill in the large black areas. With those areas filled in, all that was left was the face, so I opted to ink the mask with my trusty Copics and then erase all the pencil lines in preparation for coloring. Finally, I inked in the eyes and signed the inked piece. 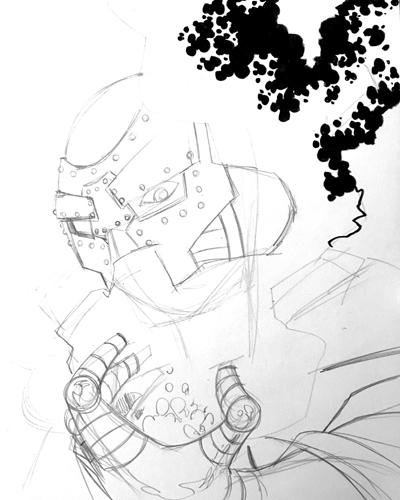 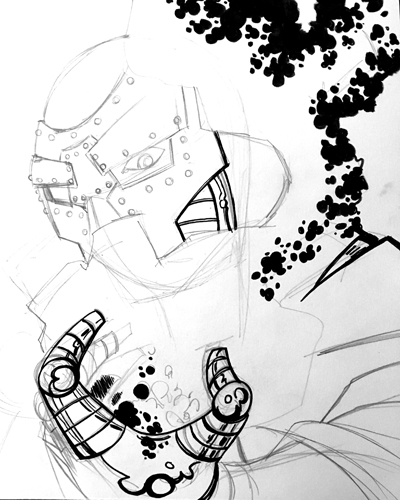 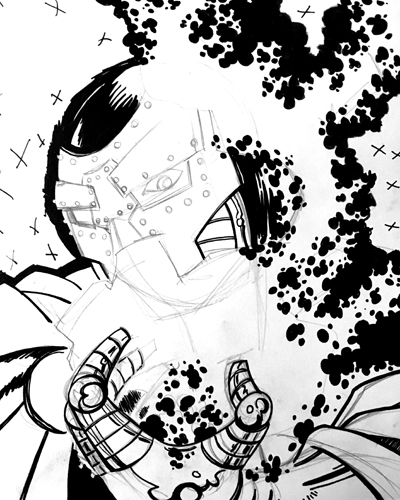 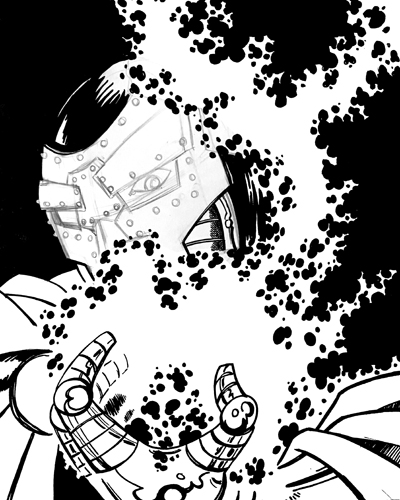 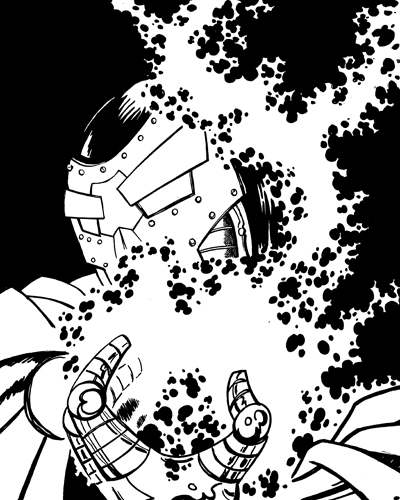 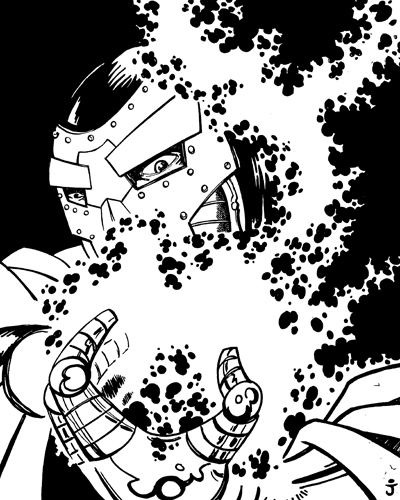 Coloring
For the coloring, I used Spectrum NOIR and Premiere by Nichol alcohol-based markers. If you used these or similar markers, I suggest that you test the colors on paper like what you are using. Additionally, be certain that the shades that you need have enough pigment. For this piece, I ended up not having enough yellow to finish and had to go to my local art supply store for more.

I started with the eyes because that was the only area in the image that wouldn't be yellow, green, or grey. I knew from the start that most of this piece would be mostly yellow and green, so I laid in a layer of yellow where I would have green later, and then went over the green area with a light shade of green followed by the darker shade of grey. Because I'm using alcohol-based markers, I always start with my lighter shades before the dark in order to build depth in my colors. 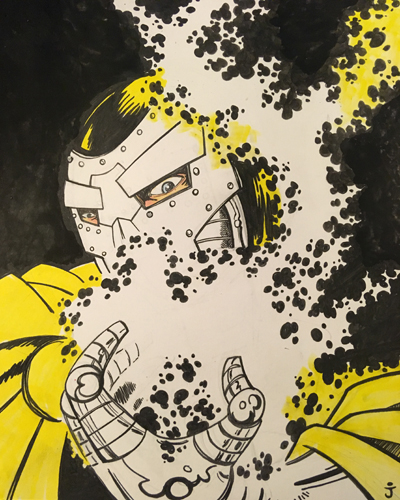 Next, I went in and colored the mask. Note that I added hints of the yellow of the Kirby Krackle on the mask in the previous steps and that this step includes grey on the back fingers that were later layered with yellow. All this adds depth to the colors, and requires just a little bit of planning. 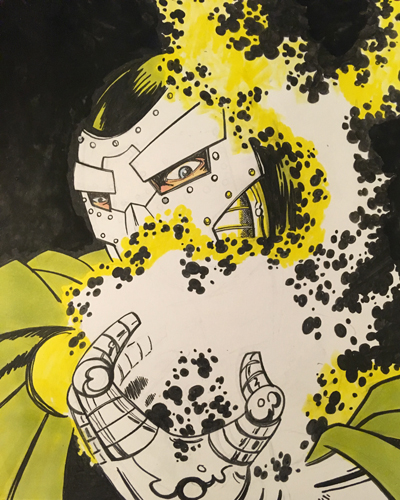 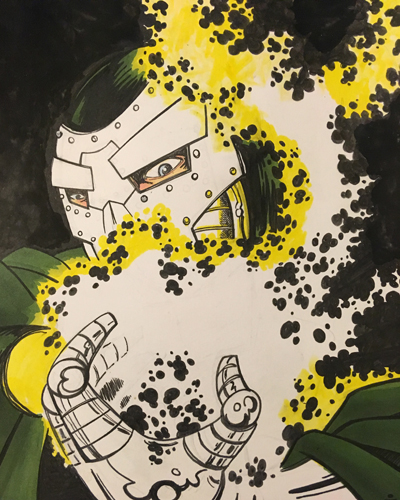 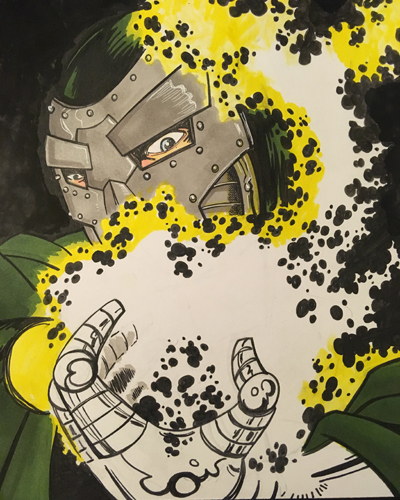 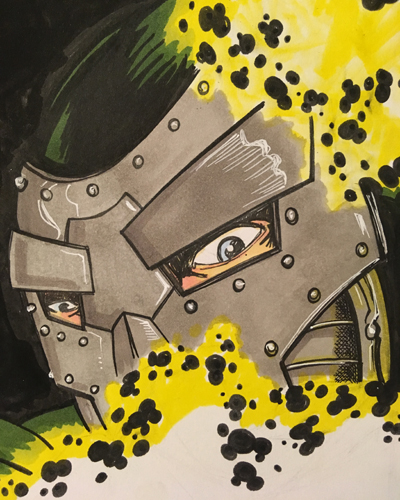 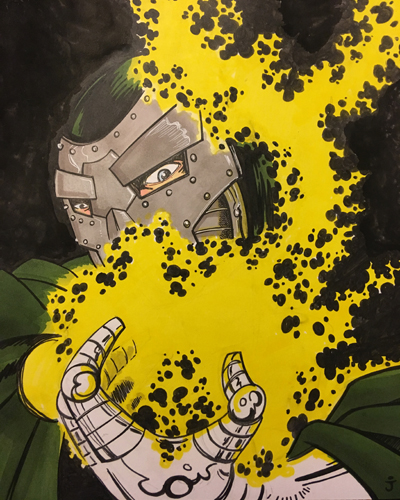 Finally, I finish off the gauntlet and add reds and orange into the Kirby Krackle. 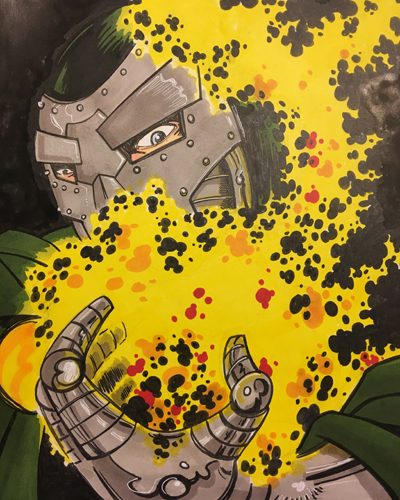 This piece, and all my other weekly comic illustrations, is available in the store. New ones are added on the first Sunday of each month. 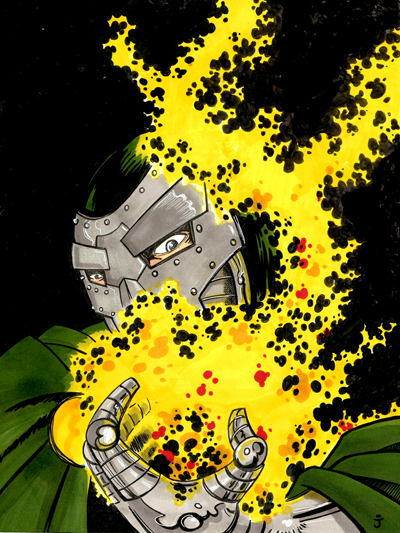